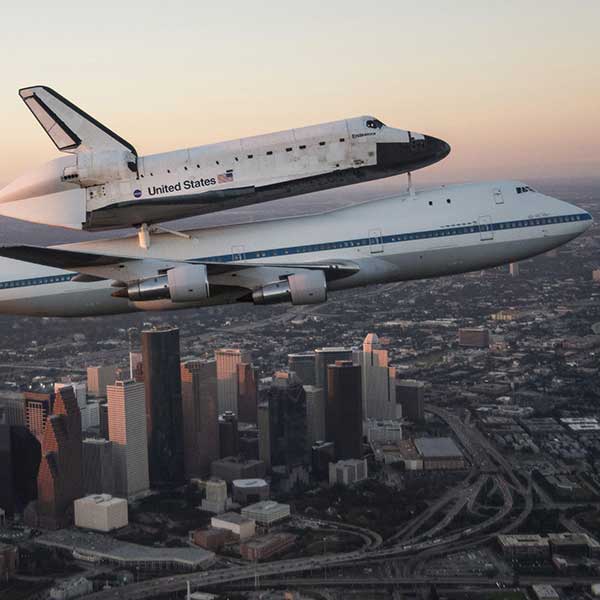 The Shuttle Carrier Aircraft (SCA) were used to ferry Space Shuttles from landing sites back to the Shuttle Landing Facility at the Kennedy Space Center. The orbiters were placed on top of the SCAs by Mate-Demate Devices, large gantry-like structures that hoisted the orbiters off the ground for post-flight servicing then mated them with the SCAs for ferry flights.

Boeing 747-123 registered N905NA, was originally manufactured for American Airlines and still carried visible American cheatlines while testing Enterprise in the 1970s. The aircraft was extensively modified for NASA by Boeing in 1976. While first-class seats were kept for NASA passengers, its main cabin and insulation were stripped, mounting struts were added, and the fuselage was strengthened. Vertical stabilizers were added to the tail to aid stability when the Orbiter was being carried. An internal escape slide was added behind the flight deck in case of catastrophic failure mid-flight. In the event of a bail-out, explosives would be detonated to make an opening in the fuselage at the bottom of the slide, allowing the crew to exit through the slide and parachute to the ground. N905NA carried space shuttles 223 times and amassed 11,017 flight hours over 42 years.

SCA N905NA was last used to ferry the retired Space Shuttles to their respective museums. After delivering Endeavour to the Los Angeles International Airport in September 2012, the aircraft is now on display at the Space Center Houston with the mockup shuttle Independence mounted on its back. Visit Space Center Houston to see the exhibit, just a short drive from Galaxy FBO at HOU!