The nose of the Super Guppy Turbine was opened at sunrise on Monday, November 25, 2019 revealing the packaged Orion spacecraft inside. 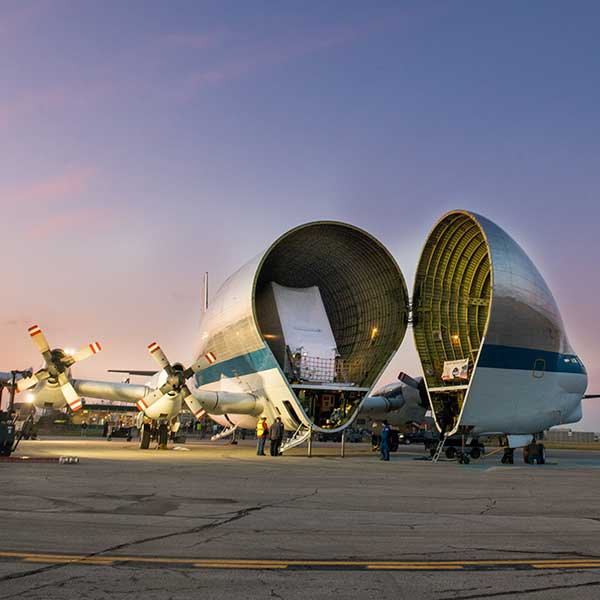 Super Guppy Turbine transported the Orion spacecraft to NASA’s Plum Brook Station for testing, prior to the upcoming Artemis I launch.

The transportation of oversized cargo has always been a tremendous problem for logistics planners. NASA was particularly vexed by this problem during the early years of America’s space race, when large rocket parts destined for Cape Kennedy had to be shipped by barge through the Panama Canal or Gulf of Mexico. This amounted to a significant investment in time during a period where we had little to spare. In 1961, California-based Aero Spaceline Industries solved this problem when it introduced the first Guppy aircraft. Built from a heavily modified KC-97 Stratotanker, the Pregnant Guppy featured the largest cargo compartment of any aircraft ever built. At just over 19’ in diameter, this massive cavity was specifically designed to carry the second stage of a Saturn rocket for the Apollo program. Because of the Pregnant Guppy, NASA was able to deliver crucial oversized cargo to the Cape in eighteen hours as opposed to 18 to 25 days aboard a barge. To say that this amazing aircraft helped America win the space race would be an understatement!

The program was so successful that ASI followed up with an even larger version of the aircraft in 1965. Dubbed the Super Guppy, it was equipped with a 25’ diameter cargo bay, more powerful engines, a pressurized cockpit, and a hinged nose for easier loading of cargo. During its illustrious 32 years of service, the original Super Guppy flew over three million miles in support of NASA’s Apollo, Gemini, Skylab, and the International Space Station programs. The Super Guppy Turbine is the last generation of Guppy aircraft ever produced and only four were ever made. NASA’s Super Guppy Turbine continues to support America’s space program today, but with its unique capabilities it has attracted the attention of other government entities as well. In recent years, the Guppy has been working with the Department of Defense and government contractors to move aircraft and large components around the continent, including T-38s for the Air Force and V-22s for the Navy. Although much of the glory of America’s space program may be behind it, the Super Guppy continues to be one of the only practical options for oversized cargo and stands ready to encompass a bigger role in the future.