The X-38 V-132 research vehicle was released from NASA’s B-52 over the Edwards Air Force Base range in California’s Mojave Desert. 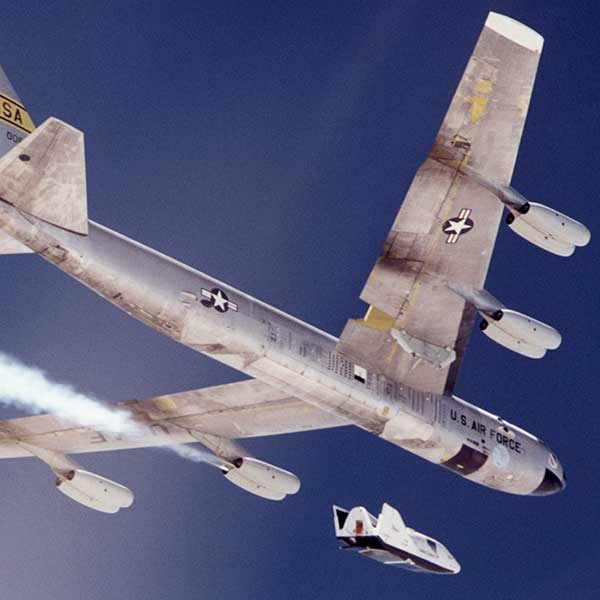 Shortly after the photo was taken, a sequenced deployment of a drogue parachute followed by a large parafoil fabric wing slowed the X-38 to enable it to land safely on Rogers Dry Lake at Edwards on July 10, 2001. NASA engineers from the Dryden Flight Research Center at Edwards, and the Johnson Space Center, Houston, Texas, are developing a “lifeboat” for the International Space Station based on X-38 research.

The X-38 was an experimental re-entry vehicle designed by NASA to research a possible emergency crew return vehicle (CRV) for the International Space Station (ISS). The 1995–2002 program also developed concepts for a crew return vehicle design that could be modified for other uses, such as a possible joint U.S. and international human spacecraft that could be launched on the French Ariane 5 booster. The program would eventually develop a total of three test prototype flight demonstrators for the proposed Crew Return Vehicle, each having incremental improvements on its predecessor. All three were wingless lifting body vehicles used in drop tests. The X-38 program was cancelled in 2002 due to budget cuts.