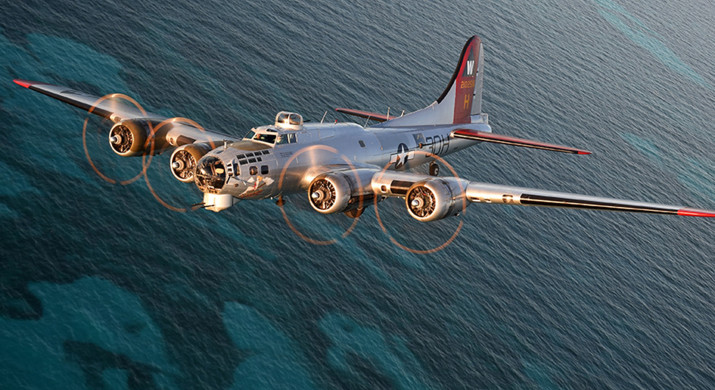 Visit Galaxy FBO – Friday, November 6th to Sunday November 8th, as the Experimental Aircraft Association’s (EAA) ‘Aluminum Overcast’ B-17 Flying Fortress is visiting us all the way from Oshkosh, Wisconsin.

The ‘Aluminum Overcast’ will be on display at Galaxy FBO for tours and flights. You can also enjoy watching the B-17 take off and land on Runway 14-32, while you are enjoying brunch/lunch at Black Walnut Café‘s patio on our 3rd floor.

EAA’s B-17G-VE, serial number 44-85740 and nicknamed Aluminum Overcast, was delivered to the U.S. Army Air Corps on May 18, 1945. Although delivered too late to see action in World War II, the airplane has an interesting history. Purchased as surplus from the military inventory for a mere $750 in 1946, the airplane has flown more than 1 million miles. It has served as a cargo hauler, an aerial mapping platform, and in pest control and forest dusting applications.

The airplane’s return to its military roots began in 1978, when it was purchased by a group of investors who wished to preserve the heritage of the magnificent B-17. The group, “B-17s Around the World,” was headed by Dr. Bill Harrison. The economic reality of simply maintaining a vintage bomber, let alone the cost of restoration, prompted the group to donate the B-17 to EAA in 1983. Since that time, an extensive program of restoration and
preservation was undertaken to insure Aluminum Overcast would be a living reminder of World War II aviation for many years to come. The restoration took more than 10 years and thousands of hours by dedicated staff and volunteers at EAA’s Oshkosh, Wisconsin, headquarters.

Aluminum Overcast proudly carries the colors of the 398th Bomb Group of World War II, which flew hundreds of missions over Nazi-held territory during the war. Aluminum Overcast commemorates B-17G No. 42-102516, which was shot down on its 34th combat mission over Le Manoir, France, on August 13, 1944. Veterans of the 398th helped finance the bomber’s restoration.

When the airplane was sold in 1946, most of the original military equipment had been removed. Over the years, many of these items have been located, restored, and returned to Aluminum Overcast.

The airplane was on display at the EAA AirVenture Museum in Oshkosh until October 1993 when it was moved to EAA’s Kermit Weeks Flight Research Center for maintenance and restoration in preparation for its first national tour in 1994. The B-17 will eventually be housed in the EAA AirVenture Museum’s “Eagle Hangar,” which features numerous World War II aircraft and exhibits.

The B-17 is an important part of both United States and aviation history. It can help us understand the technology of the times, the era in which the aircraft was developed, and the human sacrifices that make today’s freedoms possible.