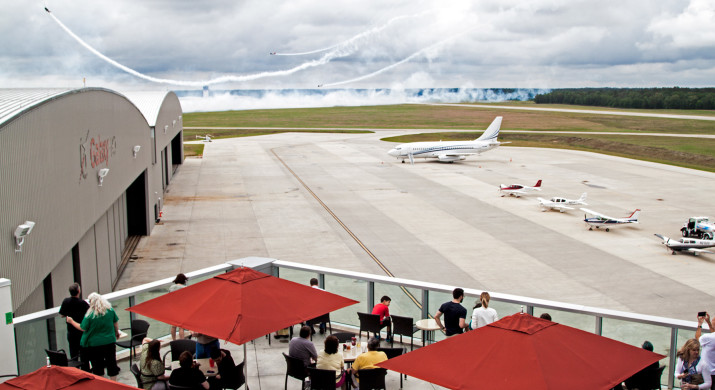 As the fall approaches and the weather cools, head outside to sample the excellent aviation shows that Texas has to offer!

The following airshows, aviation events and attractions are an easy distance from our very own Galaxy FBO and are sure to be exciting for fellow pilots & AvGeeks.

August 15 marks the 70th anniversary of the end of the World War II. The Boeing B-17 Flying Fortress was primarily employed by the United States Army Air Forces (USAAF) in the daylight precision strategic bombing campaigns during the war. 12,731 B-17s produced between 1936–1945, and today only 9 remain airworthy. Join us on August 15th, as the Gulf Coast Wing of the Commemorative Air Force will have the Texas Raider B-17 on display at Galaxy FBO for tours and flights. You will enjoy watching the B-17 take off and land on Runway 14-32, while you are enjoying brunch/lunch at Black Walnut Café‘s patio on our 3rd floor.

With many exhibits including static displays, kid zones, and interactive exhibit booths, The Alliance Air Show is a guaranteed good time. With performances featuring the U.S. Navy Blue Angels, the Breitling Jet Team, and various others, both aviation enthusiasts and novices alike will enjoy the show! Advance tickets are available now to appreciate fine flying and the variety of antique, military, and business aircraft. Visit www.allianceairshow.com for details.

Check out the Coyote Squadron, a unit of the Commemorative Air Force, to celebrate the restoration and maintenance of historic World War II era aircraft. The highlight of the event will be the afternoon departure of the aircraft. Grab your little ones or a fellow AvGeek to enjoy both the displays and the grand finale. More information is available at www.coyotesquadron.org/airsho2015.htm

Another exciting aviation competition this September weekend is the Red Bull Air Race, featuring some of the world’s most daring and skilled pilots. Count on things heating up on Sunday afternoon, when both the “Master Class” and the “Challenger Class” of pilots participate in their respective final races. With the “Great American Speedway” being one of two American venues on Red Bull’s exciting racing journey, this thrilling display of aviation feats is one you cannot miss. Visit www.redbullairrace.com to learn more about the international competition.

Warbird and aerobatic aviation fans alike will enjoy this demonstration of flying expertise, featuring the talents of the U.S. Air Force Thunderbirds, Tora! Tora! Tora! and more! Conveniently located close to Galaxy FBO, this airshow will feature pristine aircraft as well as an insight into NASA’s exploration of space. Check out www.wingsoverhouston.com for all of the details.

With the skills of the some of the best in the business, including the Wings of Blue, the U.S. Air Force Thunderbirds, and the U.S. Army’s Golden Knights, this airshow will be a treat for all of you AvGeeks out there! Free and open to the public, this tribute to the Air Force’s history will certainly wow attendees. More information is available at www.jbsa.mil/home/2015JBSAAirShowandOpenHouse.aspx

Other Aviation Related Points of Interest for the AvGeek

Looking for things to do in between air shows that fuel your love of aviation? Take a look at these suggestions for aviation museums to visit:

For those willing to trek to Fort Worth, the American Airlines C. R. Smith Museum will not disappoint. Featuring an interactive aerodynamics exhibit known as Flightlab, the museum allows guests to actively engage in understanding flight and aviation. In addition to flight history exhibits and films, with special attention to American Airlines, guests can observe how mechanics support the demands of large aircraft engines present in commercial fleets. For more information, visit www.crsmithmuseum.org to see if they’re hosting any special exhibits as well.

In nearby Galveston, aviation enthusiasts can enjoy the official Texas Aviation Hall of Fame housed at the Lone Star Flight Museum. With historic aircraft galore and a camera-friendly atmosphere, guests can appreciate Texas’ role in the development of aviation. Notably, the “Lady Be Good” exhibit is being displayed again after being damaged during Hurricane Ike, commemorating the missing aircraft from an Allied attack during WWII. Guests can also purchase flight experiences in a variety of World War II era warbirds, with prices ranging from $250-$325. Check out www.lsfm.org for more details.

See a different side of aviation by visiting the historic U.S.S. Lexington in Corpus Christi. Renowned as the last operating aircraft carrier from World War II, the U.S.S. Lexington holds 20 aircraft on loan from the National Museum of Naval Aviation. Check out the interactive aircraft flight operations tour for a special treat with a group of 6 or more, $50 per person. Visit www.usslexington.com for more information.

The Frontiers of Flight Museum

Conveniently located just north of downtown Dallas at the southeast side of Dallas Love Field Airport, in a 100,000-square-foot facility, The Frontiers of Flight Museum provides a focal point to explore the history and progress of aviation. The museum has in its collection over 30 aircraft and space vehicles, several of which were built in the North Texas area. Examples include full-size model of the 1903 Wright Flyer, a complete Boeing 737-300 aircraft from Dallas’s own Southwest Airlines and Lear Fan 2100 – the world’s first “plastic” (carbon fiber composite) business jet. For more information, visit www.flightmuseum.com.